A couple of days before our trip to Sorrento came to an end, we spent potentially the hottest day of the holiday in Pompeii. It was one of my favourite parts of history taught at school so I couldn’t wait to visit such a historic city!

We hopped on the train (an experience in itself) and within the hour arrived in Pompei Scavi with many other tourists surrounding the station, it suddenly felt very different to where we had just come from. It’s difficult to explain unless you have been there, or perhaps I was just nervous about our impending trip up Mount Vesuvius (you know, that volcano that mostly destroyed and buried Pompeii, Herculaneum and areas nearby), but it felt very surreal being in this city after hearing so much about it.

We made a quick pit stop for coffee before heading to our transportation – because there is always time for coffee in Italy. Luckily the mini bus that picked us up was only taking us to another means of transport, the monster truck as I liked to call it. It was a bumpy road up to where they drop you off (not great for travel sickness sufferers) but the views when you get there are incredible, and that’s before you reach the top.

You have about 90 minutes to reach the top of the volcano and back down again before your transport leaves base camp, so we made tracks and began our journey up to the top.

Now, Mama A and I don’t do things by halves. Do as the Romans would do, I say – so we climbed to the top and down again in white attire and sandals. We were judged by many tourists passing us along the way, but how many people can say they have climbed Vesuvius in sandals?

In all seriousness, if you’re reading this and planning to go – wear sensible clothing, we only wore what we had packed, and we hadn’t packed trainers.

Be careful where you are stepping too. Along the way you will (hopefully) spot a few fairly large craters in the gravel, and it’s a terrifying thought what could happen if you took a wrong step. There are flying bugs when you get to the top so bright colours will only attract them more, as we found out, so muted colours are better – prepare to shake it off…quite literally.

The views were breathtaking. I felt on top of the world.

I would love to spend more time up there to just sit and take all of it in – I mean, look at it. The perfect spot to forget about your troubles and admire one of the most beautiful views in the world.

It’s amazing to think such views come from somewhere that buried a city and killed so many people in 79 AD. Of course the main attraction was the crater itself, so we lined up to take a look into one of the most dangerous volcanoes in the world. It was fascinating! There isn’t much activity at the moment but apparently the government does have an evacuation plan in place if experts find cause for concern.

After spending some time taking photos it was soon time to head back down to the bus. I was aware of who else was on our bus and I would recommend doing the same thing as it’s helpful to know when it’s time to leave. Another thing to note is that there is no bathroom at the top, just in case you get desperate after all that water you will be drinking to re-hydrate…

The journey back was a scenic but bumpy ride, and we were happy to be back on familiar ground.

We took a short walk to Scavi Di Pompei, the only archaeological site in the world that shows the appearance of an ancient Roman city as a whole. It’s incredible how the amount of ash and lapilli coated everything from houses and roads to people yet so many remains are still in one piece.

Strolling along the cobbles, finding our way through ancient Pompeii felt like an enjoyable history trip. I didn’t particularly like History at school but I remember enjoying the Roman period, alongside Henry VIII, it stands out in my mind the most. Walking through you can imagine what life could have been like 2,000 years ago before Vesuvius erupted, as the streets are still intact (with thanks to archaeologists and vulcanologists through the years helping to restore the town) and it seems to be an ongoing project going by the building work that was present during our visit.

I found myself getting lost, in both senses.

To wander around, wondering how the locals felt when the volcanic ash was raining on Pompeii, gave my trip to Italy a little more substance. It was such a fascinating part of history and the energy of Pompeii still felt very much alive, and it doesn’t get more real than when you come across some of the people who were buried in the lava.

On first glance you think they are statues, but when you look a little closer you can see the emotion on their poor faces of being utterly terrified of what was happening. It’s hard to imagine how you would feel in that moment but this particular civilian next to the ‘wishing bowl’ holds a strong indication of how many felt, don’t you think?

We continued through what felt like a maze, and had a bit of fun with the columns that surrounded us –

Now you see me, now you don’t…

There were several ‘crossroads’ that could confuse even the most knowledgeable guide, so I made the most of getting lost by having a bit of fun up and down the streets. The heat was real, so we tried to make our way towards the exit, wherever that was, you just have to follow a path and hope it takes you in the right direction really.

There are areas where you can still see the size of the rooms and there was even a sink, whether this was an addition after the disaster I’m not sure, but it brought the place to life. Intricate details on ceiling are present, statues, greenery and many other aspects make the experience leaving you with so much more than what you think you know about Pompeii.

It makes you use your imagination and brings you incredible insight to a town that despite how little is really there, can conjure up so much emotion.

There is one cafeteria for refreshments and maps to help you find your way around the site – allow at least three hours for your visit, or longer if you want to see the amphitheatre too.

We finally found our way out, and what a view we were left with.

The memory of Pompeii lives on.

Returning to Sorrento and with a view of Vesuvius, we enjoyed our penultimate evening by our rooftop pool with a new perspective.

This was such a long post to write but I’ve really enjoyed taking a trip back down memory lane. I hope this series of ‘Exploring Italy’ posts have given you an idea of how much there is to see and do.

I always love reading your comments and getting feedback on my posts, so leave me a comment below or tweet me. 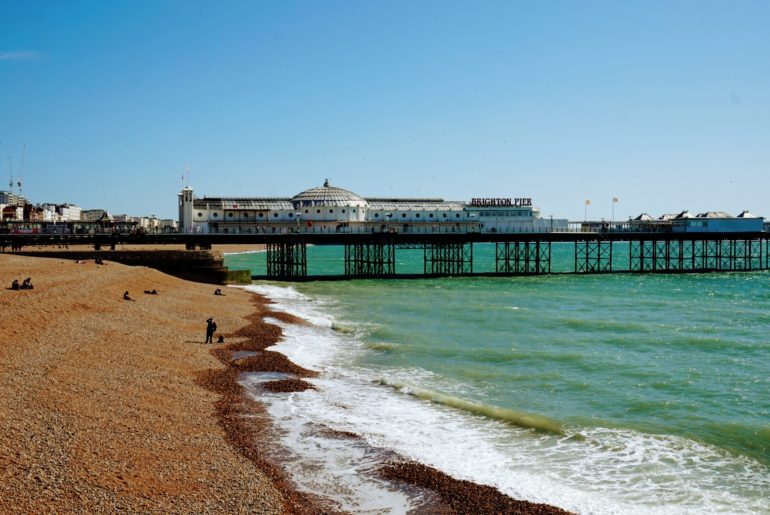 A Mini Break to Brighton

Escape to the Island: Why You Need to Visit Kefalonia

5 Free Things To Do In New York City